[dropcap style=”font-size: 45px; color: #549eb9;”]T[/dropcap]he apartment hotel where we are temporarily staying has been quite nice. The staff have all been very friendly and helpful. Besides the staff, one of the nicest perks of staying here is that breakfast is included each morning. It has been in the low 60s when we head down to eat and that makes for a throughly enjoyable breakfast. 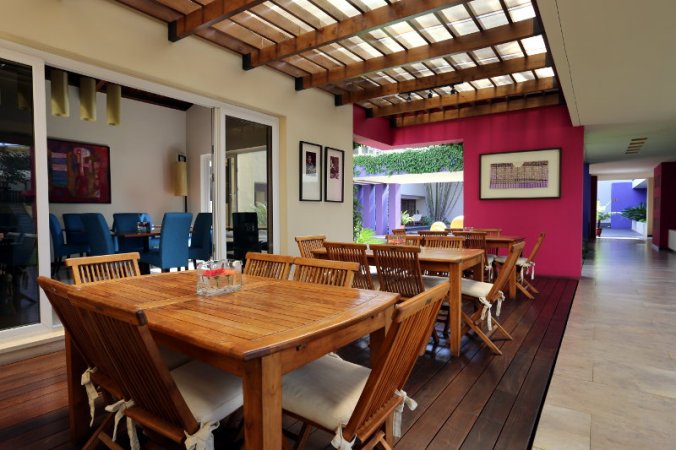 DiploTot has become a big fan of the swing that they have in this playground area and she typically gets a morning swing, as well as one or two more later in the day.

[dropcap style=”font-size: 45px; color: #549eb9;”]L[/dropcap]ooks like DiploDog is having quite the time out at Country Dogs. We somehow missed this photo of her on their Facebook page from a few days back, but a text update I got about her matches the photo quite well:

“She’s filthy. That usually means a dog’s having a good time. She’s eating well. My farmhand just said she’s lying in the shade down by the pond, chewing on a stick.”

This was the commentary on the Country Dogs Facebook page:

“DC/NoVa: When she’s not fetching sticks from the pond, Maggie is perfecting her yodeling.”

We’re really looking forward to getting her down here and are so pleased that we found this option for her while we are getting settled in.

We’re still getting the paperwork processed in order for us to be able to drive the car we bought, so in the meantime, a local staff member from the embassy was able to come to our hotel to drive us to get groceries on Friday afternoon. It is going to be an interesting experience starting to drive here, given the amount of traffic and the way the streets are organized, so for the time being, I’m in no hurry to start that stressful process.

The driver (who has been working at the embassy for 15 years) took us to Paiz, one of the major grocery store chains here in the city that is actually owned by Walmart. This particular location was in a mall, so we entered an underground parking garage, where our driver then dropped us off by the elevators.

There are quite a few American products available here in Guatemala City so pushing our cart up and down the aisles was not a completely unfamiliar experience. One thing that immediately jumped out at me was the number of in-store representatives from the various food brands that were stationed near their respective products to offer samples and answer questions. This was a pretty effective marketing technique as we ended up selecting some of our items, like canned tuna and yogurt, simply because there was a helpful representative there.

Once some more of DiploMom’s paperwork gets processed, we’ll have cards that will allow us to not have to pay sales tax on things like groceries, home Internet service, cell phones, etc. The clerk at Paiz asked us if we the card, but unfortunately, not yet. It would have saved us about $10, which isn’t bad, especially considering how that will add up over the course of two years.

It is especially fun being out with DiploTot, who is continuing her charm offensive here in Guatemala. The people here are very friendly and love children, so there was no shortage of interactions for her as we cruised the aisles.

We had a wonderful dinner at the high-rise apartment of DiploMom’s social sponsor, who has been here with her family since October. The views were stunning, so next time we are over there I am going to make sure I have my camera. We’re off later today to explore the Oakland Mall that is a couple of blocks away.

We arrived in Guatemala City on Wednesday and are thrilled to finally be here. We were greeted by DiploMom’s office sponsor at the gate and we were then escorted through the airport to a waiting area where we could sit down while all our luggage was retrieved and loaded and our passports processed.

From there we were able to get right into a van and were driven to our hotel. After getting into our room, we hit the ground running and were able to go visit several properties with a realtor that DiploMom had been corresponding with prior to our arrival, as our plan is to get into a house as soon as possible.

It made for a hectic, yet very productive day. DiploTot was an absolute champ throughout all of this, especially considering that she didn’t get much nap time in. She snoozed before we took off for about 45 minutes and then was able to grab a cat nap in her car seat on our way to see the first property. She is taking the changes in stride and is enjoying crawling all over our room.

We were exhausted by the end of the day and quite hungry by the time we got DiploTot down. It wasn’t very cultural, but we were starving and it was already dark, so we simply ordered a Domino’s pizza for delivery, along with 6 bottles of water to get us through until we get to the store later today. Pizza never tasted so good.

DiploTot will be turning one next month, but since we came through Houston, we had her birthday party a bit early. Thanks to everyone who was able to make it out to Gymboree to help us celebrate. We’ll be ready with a piñata for the official one year mark in Guatemala. 🙂 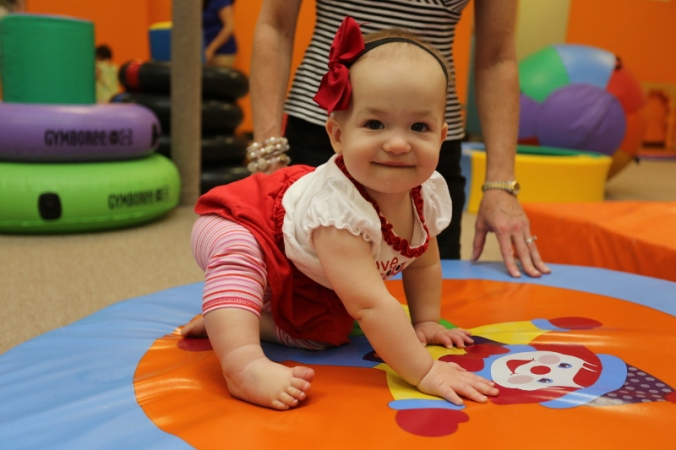 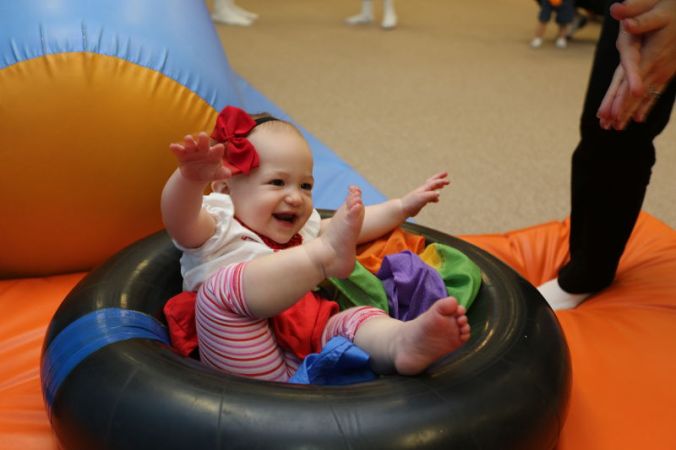 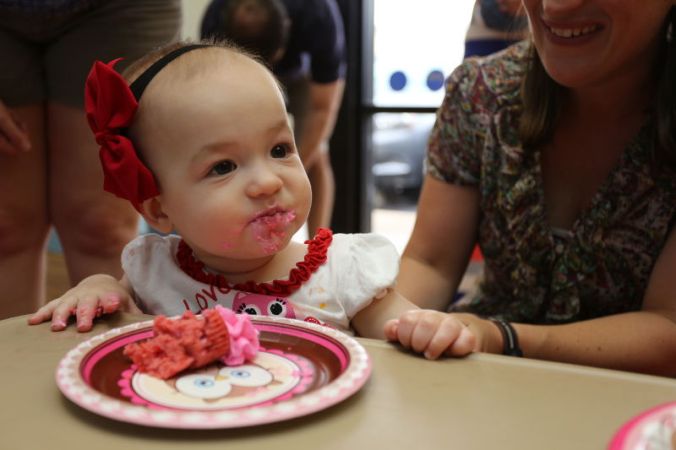 The process of packing out from The Oakwood was hectic, but at least a lot less stressful than when we packed out to move up. When heading out to post, we have two types of shipments. One is our unaccompanied air baggage (UAB) that is limited to 600 lbs and should arrive to Guatemala City in 1-2 weeks.

The second shipment is our household effects (HHE), which will take 1-2 months to arrive. This is essentially everything else in our apartment, along with what we are having sent from the storage facility. A big part of the planning process for the pack out was deciding what we wanted for each shipment and then dividing them into separate areas in the apartment to minimize the chances of items getting mixed up when the packers arrived.

We were up pretty late the night before. I finally cratered out at midnight, and DiploMom was up until around 3 a.m., but we got everything set and were in good shape for the packers. DiploDog got to go hang out in the morning at another apartment with friends from DiploMom’s A100 training class who have two lab puppies.

DiploTot had to miss out on her morning nap, but she was a champ and was able to catch up later in the afternoon.

Leading up to the pack out, we were quite busy getting items for the HHE shipment, that were large, that could not be shipped via air, or that would be more expensive to buy in Guatemala City. Some of the items included a queen mattress and box springs, a Christmas tree, a toy kitchen set and tricycle for DiploTot and several surge protectors/uninterruptible power supplies for the inevitable power issues that could fry computers and TVs. Target should also be quite appreciative for the toiletries that we loaded up with.

We managed to do a really good job of estimating what would fit for our UAB and we ended up with 521 lbs. The rest of our HHE weighed in at 1,385 lbs. These are our four UAB boxes lined up in the hallway.

Now we have the fun of living out of our duffels and luggage until we get to Guatemala City and our UAB arrives. We’re hoping that given the timing of our pack out, that we might not have to wait all that long before they arrive.

Now where is DiploDog in the midst of all of this now that we are en route from D.C.? Well, she’s out at summer camp in the Virginia countryside and will arrive a couple of weeks after we do. She should be enjoying all the outdoor time and the pond swimming. We miss her and will be excited for her to arrive.

We are finally on our way. I’ll have a post later with some photos from our pack out, but in the meantime, it’s time to comment on a very obvious reality – it’s pretty hard to travel with lots of bags, especially when a baby is involved.

We are passing through Houston for some consultations that DiploMom has before heading to Guatemala City. After our apartment was packed out, we had 3 large duffel bags, 3 large rolling suitcases, 2 backpacks and a car seat. We arranged for taxi service the night before we left, specifically requesting a van due to the large amount of luggage.

We were set and waiting at 9:00 a.m. sharp for the taxi. At 9:10, still no taxi. Long story short – after several angry phone calls to the company and much confusion over where the cab was, we ended up in another taxi that came to the Oakwood for someone else and that person cancelled, so we ended up with him and were finally on our way by 9:40.

Needless to say this made for a stressful start to the process, not to mention a very sweaty one, given loading bags and installing the car seat. We had a great driver and everything fit great in the van. After cooling down on the ride to the airport, it was time to get sweaty again unloading everything and getting it inside the terminal.

I was quite pleased to finally get all six bags checked in so we could make our way to security.

Yep, that’s the car seat on my back.

After the hecticness of getting to the airport and getting checked in, we were grateful for small blessings. The line at security wasn’t too bad, but we were kindly moved up to the expedited line by a worker who I imagine took sympathy on us given DiploTot and her Quasimodo father.

We finally got to the gate with just enough time to grab some lunch before the plane started boarding. We weren’t quite sure how DiploTot would manage on the flight, but she was a champ, even sleeping for about 45 minutes.

We were very grateful that the flight was only about 3 hours and that the flight to Guatemala City will essentially be the same. We became friends with another couple at the Oakwood who have a child the same age as DiploTot and they just moved to Cambodia. That meant a 15 hour flight from D.C. to Seoul, where they stayed the night and then flew 5.5 hours to Phnom Penh. Whew!