DiploDog finally made it to Guatemala City yesterday after a week-long delay thanks to the incompetence of the shipper we were using, Club Pet International. I’ll have more to say about them later, but to any Department of State employees who need to get their pet overseas, I most definitely cannot recommend them.

DiploDog flew out from Dulles on Wednesday afternoon and had to spend the night at the pet hotel at Intercontinental in Houston so she could board the first morning flight on Thursday down to Guatemala City. With DiploDog’s delay, she had now been away from us for an entire month, so needless to say, we were quite anxious to get her back. We headed to the airport about an hour before her flight was scheduled to land in order to meet up with the local customs broker we had to hire who was helping to get DiploDog out of customs as quickly as possible.

After meeting up with the broker, DiploMom handed over her passport to him (which feels very awkward to do, by the way) and he headed into the airport to await the plane’s arrival. At this point, the anxious waiting began. DiploMom commented that she felt more nervous during this waiting period than when she was heading in for her c-section for DiploTot. After all the snafus with Club Pet, we half expected the wrong dog to arrive or for something to have happened to DiploDog along the way.

After what felt like an eternity, but was actually a pretty short amount of time after the plane landed, the broker came wheeling out DiploDog’s crate and we ran out to greet her. DiploDog was very excited and was attempting her usual excited “squeaking” but not much came out as she was hoarse, I suppose after having squeaked her head off over the course of the past several days. At this point we had quite a crowd of locals gathering around trying to see the dog in the big crate. I had forgotten that the crate would be zip-tied and I had left my pocket knife back at the house. DiploDog was getting quite anxious to get out (for multiple reasons as we will learn later) and we were trying to figure out how we were going to get the ties cut.

Fortunately a taxi driver that had come over to check things out had a pocket knife that he handed over for me to use. With DiploDog freed, I attached her leash and we got ready to get back to our car. DiploDog was pretty excited to be out and was pulling a good bit. We navigated across to the other side of the arrivals area with the broker behind pushing the crate. Not long after reaching the other side, DiploDog stopped to take the longest pee I have ever seen, right there on the pavement. It must have gone on for over 30 seconds. No wonder she was extra excited to get out of the crate! We felt bad just continuing on, but there wasn’t any way to really tend to the mess.

With that out of the way we kept the train moving and worked our way up the ramp to get us back to the level we needed to exit and get to our car. Halfway up the ramp, DiploDog pauses again and squats to take a big dump. Well she’s two for two at this point! Fortunately we were better prepared for this and were able to get a poop bag out of DiploTot’s diaper bag to tend to the business. I imagine after all of this DiploDog felt much better. Poor thing, who knows how long she had been holding in. I’m not sure what the broker must have thought about all of this, bit I think he might have been a bit thrown by it all.

We finally got to our car and got everyone loaded up and got on our way back home. We breathed a huge sigh of relief as the entire process was a bit stressful. The airport wasn’t a totally sketchy place, but we felt a bit vulnerable since we had to bring more stuff with us and had extra cash and both of our passports. With all the activity surrounding DiploDog, it was easy to get distracted, which is what thieves are looking for.

DiploDog took the house quite well and got busy exploring every room. This is going to be a great setup for her and I am thrilled to have a yard again and to not have to ride an elevator down to get outside whenever she needs to do her business. With the awesome weather, she is going to get plenty of walks and there is also a great nature area in the neighborhood with some paths that meander down in a ravine-type area, so lots to sniff and explore. 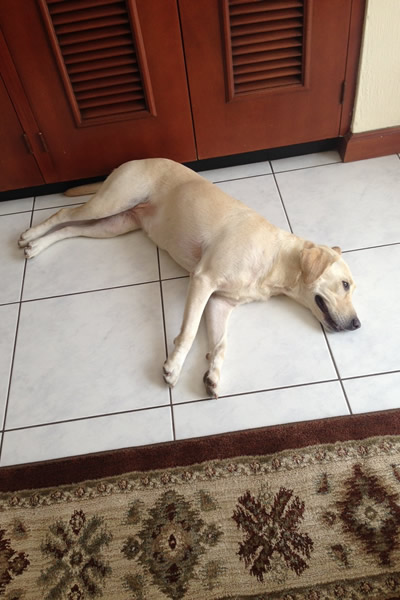 The tile floors are great for cooling down and she’ll likely get to take a dip in the pool this weekend. It is great to have the entire family back together after all of these weeks and DiploTot also seemed happy to have her friend back as well.