Ancient Mayan religion and the influence of Catholicism collide in syncretistic fashion in the Evil Saint, known as Maximón. Maximón is venerated in the western highlands of the country, especially around Lake Atitlán, where he is moved to a different house each year. He is quite fond of drinking and smoking and these items are typically brought to him, as well as being indulged in by those there to pay their respects. The locals will ask Maximón for blessings and success, but also for revenge or success at the expense of others.

We were barely off the boat in Santiago Atitlán before I was being approached about visiting Maximón. I had read in our guidebook about Maximón, so I knew I wanted to visit, I just wasn’t immediately sure if I had the time. Besides, DiploMom and my sister-in-law where busy browsing the market and weren’t ready to visit at this point. If I wanted to go, it would just be me. I started negotiating with one of the men who had approached me. It would cost more to be there to see the ritual, which would be interesting, but I didn’t have a full hour to spare. I mainly just wanted to say I visited and to take some photos, so we worked out the details – the fee for him to take me to the house, what it cost to enter and how many photos I would be able to take. I probably could have driven a harder bargain on his fee, but I was in a bit of a hurry and frankly didn’t feel like extending the process for a couple of dollars.

I paid him about $9 to take me there, a couple of bucks would net me 2-3 photos and about a buck would get me into the house. With the details essentially settled, I headed up the road with my guide, hoping that it would be easy to find DiploMom on my return. We hadn’t been walking too far when he indicated we needed to turn off the street. What we turned into was a really narrow alley that seemed like the perfect place for a gringo like me to get mugged for his camera and money. For a split second I started doubting the wisdom of my visit, but we promptly took another right turn and I found myself outside of Maximón’s house.

I was the only tourist in the house and my guide explained a bit more to me about Maximón, much was what I had read in our guidebook, but I also learned that Maximón also understands German and Italian, besides English, Spanish and the Mayan dialect spoken in the town. My cost was going to be around Q85, but I only had a Q100 bill. Fortunately for me, Maximón had change tucked away, so I was able to pay my fee and take some photos. 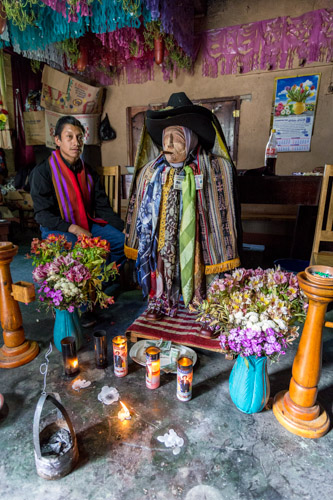 The coffin on the left with the festive Christmas lights is apparently Maximón’s father.

Once I took my photos, it was pretty much time to wrap things up. As we got up, my guide told me I could make any requests to Maximón, which I politely declined. On our way through the alley to the main street, I passed another group of about 5 tourists on their way in. It would have been interesting to have had a bit more going on at the shrine, but if we make it back to the town, I might visit again if I have more time to see the ritual. And for a few quetzals more, I can take as many photos as I want.

I’m glad I made my visit and I had no problems reuniting with DiploMom. They had made their way up the street and I promptly found them on my way back down.