We were pleased to find that there were two Home Depot stores more or less equidistant from our house, so this past Sunday we headed out to look at some paint options for the kids’ rooms and to hopefully buy a water cooler/dispenser for our big water jugs.

It is really nice having many of the same conveniences as back home here. There were no fewer than four different models to choose from. The one we wanted was out of stock, so the worker offered us the floor model and knocked 350 pesos off of the price. The funniest part in all of this is that he had a badge on his shirt that announced the fact that he spoke English. Not something I expected to see.

DiploTot was quite pleased with the purchase. We should have had one of these in Guatemala. 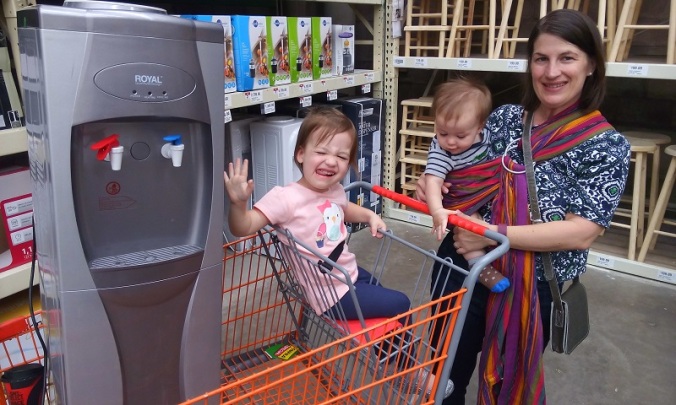 We were thrilled last week when we found out our car would be delivered this past Friday. Between getting Internet service setup and now having our call, we are feeling pretty settled.

I also got to back the car down off of the truck, something I was surprised by.  One thing that is quite different here is that car windows are not tinted as darkly as when we were rolling Guate-style.  In fact, tint this dark is illegal here in Guadalajara, so I am holding my breath a bit in the meantime while we are out and about. There wouldn’t be a problem once I showed my diplomatic passport, but I’d rather avoid the entire scenario and hassle.

We won’t have our diplomatic plates for several more weeks. We have a temporary paper we can display in the window, but of course it isn’t particularly visible, so I make sure I have my diplomatic passport with me as well until our official Mexican identification cards arrive. We’ll probably go ahead and get the tint removed and redone eventually, if for no other reason so I can wave the windshield washers off at major intersections. As it stands now I have to lower my window to tell them no since they can’t see me.

We loved our blackout tint, but it looks like we may have to say goodbye. Getting around is much easier so far than it was in Guatemala City. The traffic can be bad, but the streets are marked and laid out much better, which was helpful for getting out and enjoying the freedom this past weekend. We’re looking forward to exploring the city more.

The adjustment to Guadalajara has been pretty smooth, save for the previously mentioned power outage. You could say we were quite surprised when the power went out again on Sunday afternoon around 4:00 pm, during another brief storm that did not seem as strong as the other that had knocked out the power.

Of course we had just finished a grocery run and had only been back for about an hour. It turned out that this time, a tree fell on some power lines about a block away from the neighborhood. Here is what it looked like on Monday morning around 8:00 am. 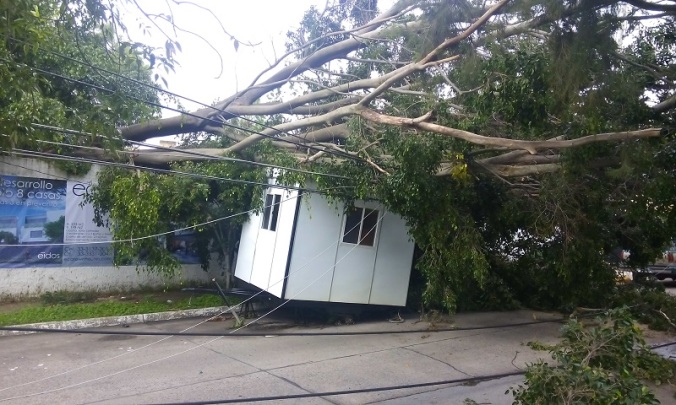 It looked like all that had been done was to close off the street to traffic since there was no way for cars to get through. A few hours later we could hear chainsaws, so we at least knew some work was underway.

DiploTot and I walked down later Monday evening to check on the status and things were at least starting to look promising.

We finally had power back on at around 9:00 pm, more or less 28 hours after it had gone out. Some other neighbors who have been here for about two years said how nothing like this had ever happened during their time. Let’s hope that is the case and we can manage another two years without these expended outages!

We arrived in Guadalajara on Tuesday after a wonderfully short flight time of about an hour-and-fifty minutes, which is particularly great with two small kiddos in tow.

The terminal at IAH was not crowded at all, which made getting everyone and everything checked in a bit less hectic. DiploMom handled getting all the bags checked while I handled getting DiploDog squared away.

We were very pleased that we were able to bring DiploDog along as checked baggage since it meant she would not have to be processed through cargo in Guadalajara and we would not need a customs broker to get her out, which apparently could cost around $1,000.  Insane!

The only other item I was holding my breath a bit on was getting through customs and out of the airport with DiploDog. We had all of our paperwork, but one never knows with such a bureaucratic process. Thankfully the process was fairly quick and everyone was very nice.

Time to unload for your exam, DiploDog. 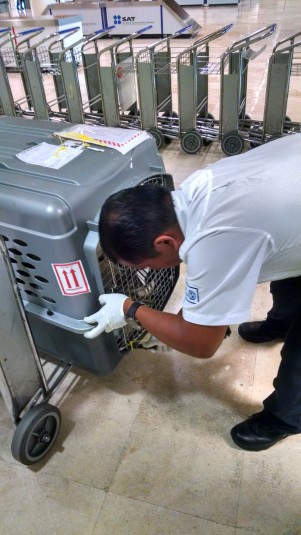 With DiploDog squared away, we had the paperwork we needed to provide to customs and we were then out of the airport to meet our sponsors and get loaded into a motor pool van to head to our housing assignment.

The traveling circus was on its way.

We are very pleased with our housing assignment. There are about eight other consulate families in the neighborhood and we have already managed to meet a few of them. Everyone has been quite helpful. Our sponsors that picked us up took great care of us by setting us up with some meals in our refrigerator that just needed to be heated up. They also took me to Walmart for an initial grocery run.

On Wednesday night we had one of the most insane thunderstorms I have ever experienced. We had just gone to bed when things really ramped up with driving rain and hail. I commented that I was surprised that we had not lost power yet and a few minutes later, my surprise was over.

What I wasn’t expecting was how long the power would be out. It went out at around 10:00 pm on Wednesday and was not back on until 4:30 pm on Thursday. Our neighbors who have been at post for a year told us that the power had never been out like that before. When it had gone out, it was usually for around 5 minutes or so. We later found out that a tree had fallen into a transformer so that helped explain things a bit more.

All in all, so far, so good. Internet is hopefully getting installed on Monday or Tuesday and we’ve been able to look at a couple of school options that are very close by for DiploTot. There is WiFi at the neighborhood club house so we can be a bit more connected in the mean time. Our UAB was delivered to us on Wednesday and our car may arrive by the middle of next week.