One of many things we had to decide on before heading to Guatemala City was what we wanted to do about a car. We are going to sell our current car before leaving, as it has quite a few miles on it and it is much easier getting a Toyota, Honda, or a Hyundai serviced overseas than a GMC. Knowing we were going to sell meant we had to find something here before we left, or wait until we arrived to buy something locally. We are able to have a car shipped over which is great, but this process can take a while and the car is usually held for up for 6 weeks before it can be cleared.

Given this process, DiploMom did some digging around in the Guatemala City Embassy newsletter and found a listing for a 2003 Hyundai Santa Fe, but unfortunately, it was a manual transmission and there was no way either of us was going to learn to drive a stick in a foreign country. We always used to joke that if we ever got on The Amazing Race, that a manual transmission would have been our Achilles’ heal. She asked the contact if she knew of anyone else at the embassy selling a car and we were pointed to another Santa Fe.

This one was a 2008 with just 47,000 miles and an excellent price – much less than what we were turning up on AutoTrader for similar year/mileage RAV 4s, CRVs, and Santa Fes. Long story short is that we decided to buy the car and I wired the payment on Monday. It was a weird feeling essentially buying the car site unseen, save for the pictures the seller emailed to us, but we are realizing this is pretty typical for State Department staff heading to and from posts.

The seller is leaving Guatemala City at the end of May, but her boyfriend is going to be able to keep the car for us until we arrive. In the meantime, local paperwork for the transfer will be handled so that the car will be ready for us as soon as we arrive. No waiting around for a month or more for the car to get cleared, which will be just great. We always assumed that whatever car we ended up with at post would be sold when our tour finished, but given the mileage and features on this Santa Fe, it may just leave the country with us when we come to the end of our time.

We are really pleased with our location in Falls Church. We have easy walking access to several parks and have been getting out on most days with DiploTot and DiploDog. Our location also places us near lots of restaurants and retail stores which is very convenient for groceries and runs to Target. The only downside is that to get to most of these places, we have to go through Seven Corners.

I have no idea how so many roads ended up converging here, but needless to say, it can be quite a mess. This intersection was the cause of a few meltdowns and less than exemplary behavior on my part when we were first getting settled in to the area. The stresses of moving across the country into a one bedroom apartment with a baby and dog, no problem. Navigating Seven Corners those first few weeks, not one of my finest moments.

We are now pros at getting where we need to go and have managed to figure out a few shortcuts that can help a lot. I’m sure when we are navigating the streets in Guatemala City, we’ll look back and laugh at how we actually thought Seven Corners was stressful.

Gorgeous weather today for Mother’s Day, which meant we got out and enjoyed it with a nice picnic and swing time at a nearby park.

My parents, DiploTot and I had a nice little visit to Great Falls today. The park is a very convenient 20 minutes from the Oakwood. As the name implies, the falls on the Potomac are the highlight. There are also several trails that I will hopefully have the opportunity to explore with DiploMom on a return visit. 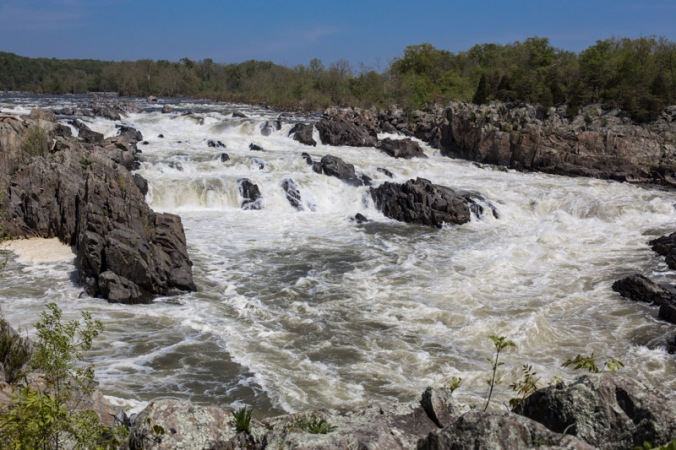 DiploDog was able to join us as well and she had a great time getting to explore new areas. Here she is wishing she could get past the barrier and into the river for some long overdue swimming time.

On the whole, DiploDog is pretty well behaved. We didn’t too great on the training end of things, but we were masters at getting her socialized with other dogs and people – she is a friend to all. Given some of her mischievous tendencies, we have continued to be surprised at how well she has adjusted to her new life her in Falls Church. Despite her stellar performance thus far, we aren’t comfortable leaving her uncrated in the apartment when we go out. She was never left alone in our house before moving, so we weren’t going to start now and run the risk of arriving back home to chewed toys, shoes and couch pillows. It was a cool, pleasant morning when we headed off to visit a new church today, so we crated her out on our balcony.

When we got in our car after church, DiploMom had a message on her phone from the apartment management saying there had been complaints about a dog and they thought it was coming from our balcony. Our plans to grab some lunch on the way home were put on the back burner as we rushed back, hoping that DiploDog wasn’t creating an international incident with barking and yelping. DiploMom was concerned that DiploDog was in distress, while I was mad that the dog couldn’t manage to stay quiet in a crate that she likes and is quite used to for a couple of hours on a beautiful day.

We pulled into the parking lot and I got out, holding my breath that I would hear her going off. Alas, all was quiet, so I breathed a sigh of relief and headed up to let her out. When I got out to the balcony, it all became clear to me what had caused the problem. We had requested some mesh/chicken wire to be placed over the railing of the balcony to keep DiploDog from sticking her head through. I never thought that maintenance would come by on a Sunday to handle the job, but someone had come and taken care of things.

When I mentioned that DiploDog is a friend to all, it would be a bit of an understatement to say she gets excited around other people. So take this excitement and combine it with the fact that she was in a crate and couldn’t get to the person on our balcony and one has the recipe for sounds that would be appropriate for a horror movie. If one was sitting on his balcony enjoying the nice morning weather, he would have thought that DiploDog was being tortured and gutted, so I can understand why some complaints would have been received. I was ultimately relieved to discover that this was the cause and I just hoped that the mesh got put up relatively quickly so that DiploDog was able to settle back down. I have to say I am surprised that maintenance stuck it out. I would have retreated and come back another day, because it would have essentially been unbearable. We are sensitive to making sure that DiploDog doesn’t bother anyone else, so we felt bad about what had happened, but felt better knowing that there had been a specific reason for the commotion.

The cherry blossoms were not quite at their peak yet when we headed down around the tidal basin this past weekend. It was another gorgeous day though, and there were tons of blossoms peepers out and about, which made it a bit tricky to actually get a photo without clueless folks mucking up the shot. The blossoms are now starting to hit their peak, so if we are fortunate, we might get another opportunity this weekend, if we are up to braving the crowds again. 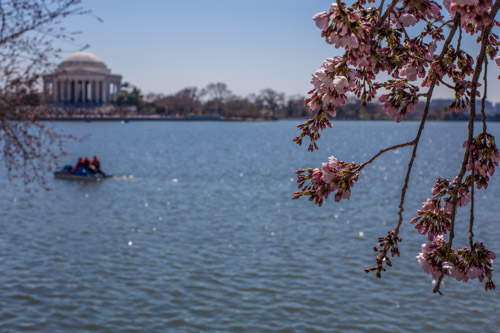 Here is DiploTot snuggled into her carrier on the shuttle bus to the Metro.

DiploTot wishes everyone a great weekend. Apparently tomorrow is International Pillow Fight Day and there will be an event on the National Mall, so it looks like we’ll plan to avoid similar craziness from last weekend. 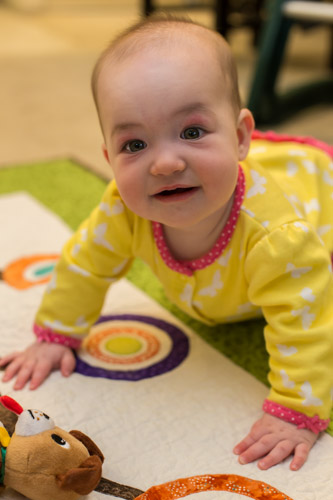 DiploTot had her first visit to the National Mall on Saturday. Here she is near the Washington Monument. Note to self: on beautiful, sunny weekend days during spring break, don’t get off the Metro at the Smithsonian stop.

DiploDog arrived in D.C. yesterday after her first flight and a couple of weeks relaxing with my parents. Only time time will tell how long her next flight will be. This first one was a relatively short jaunt. We were a bit confused by the fact that we had to pick her up in the regular passenger baggage claim area, but there she was waiting for us when we arrived, like a piece of Samsonite luggage.

She seemed to handle the flight well and was no worse for wear. Once we signed the paperwork, there wasn’t anyone to cart her to our car, so we just attached her leash, I carried her crate and we walked back through the airport on the way to the parking garage like we owned the place and it was perfectly normal to be strolling through the airport with one’s dog.

Here she is working it for a well deserved treat after her big day.

We were a bit concerned about how she would make the transition to a one bedroom apartment after having a house with a yard, but so far, she has been a model dog. It is actually a bit disconcerting how well she has behaved. We keep waiting for the other shoe to drop. She had a new bed waiting for her when she arrived and she took to it immediately.